View 4-minute produced "trailer" of REFUGEE below:
REFUGEE was a moving evocation and I loved the way the stories threaded through one another in counterpoint across space and time.--Stephen Clingman
​
Photos by Bob Labrie 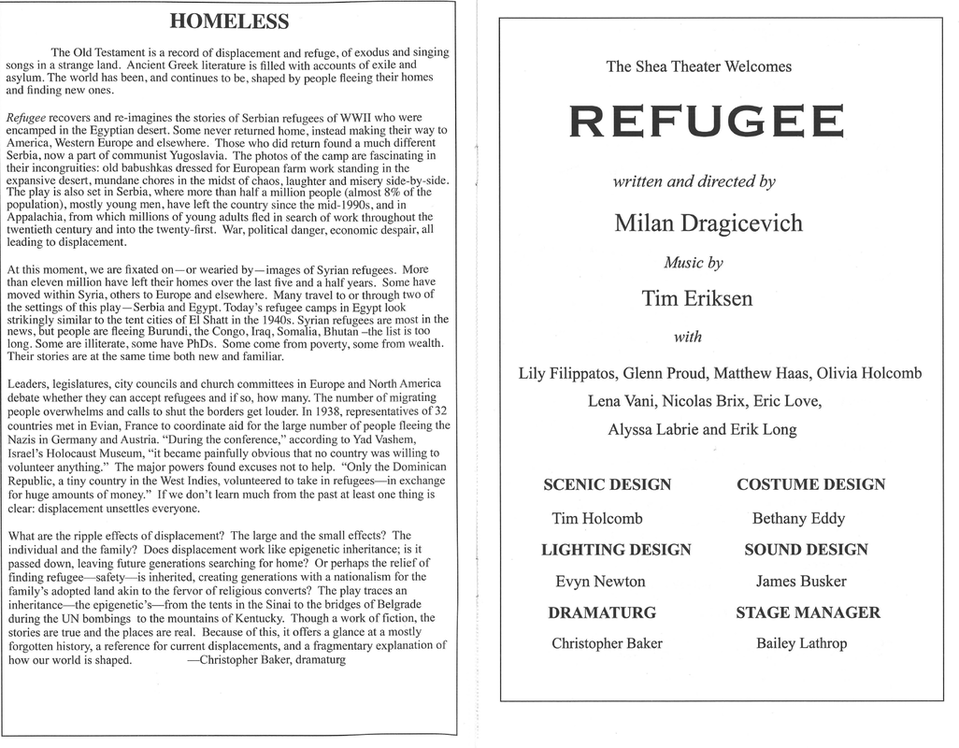 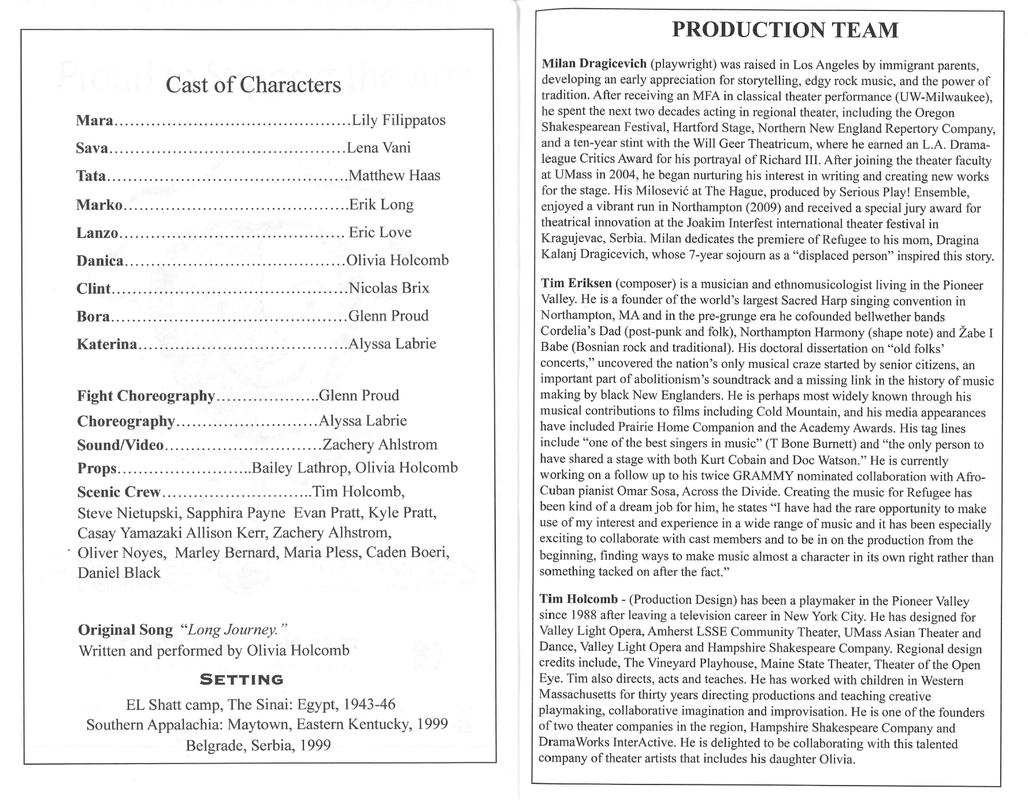 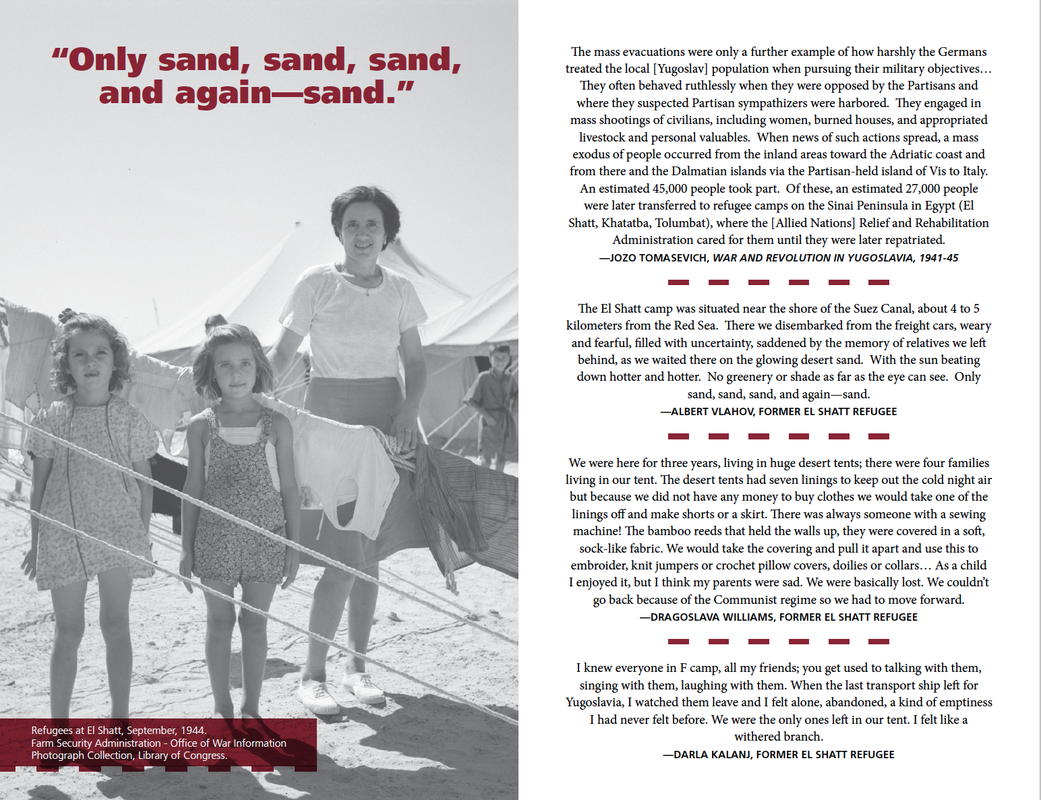 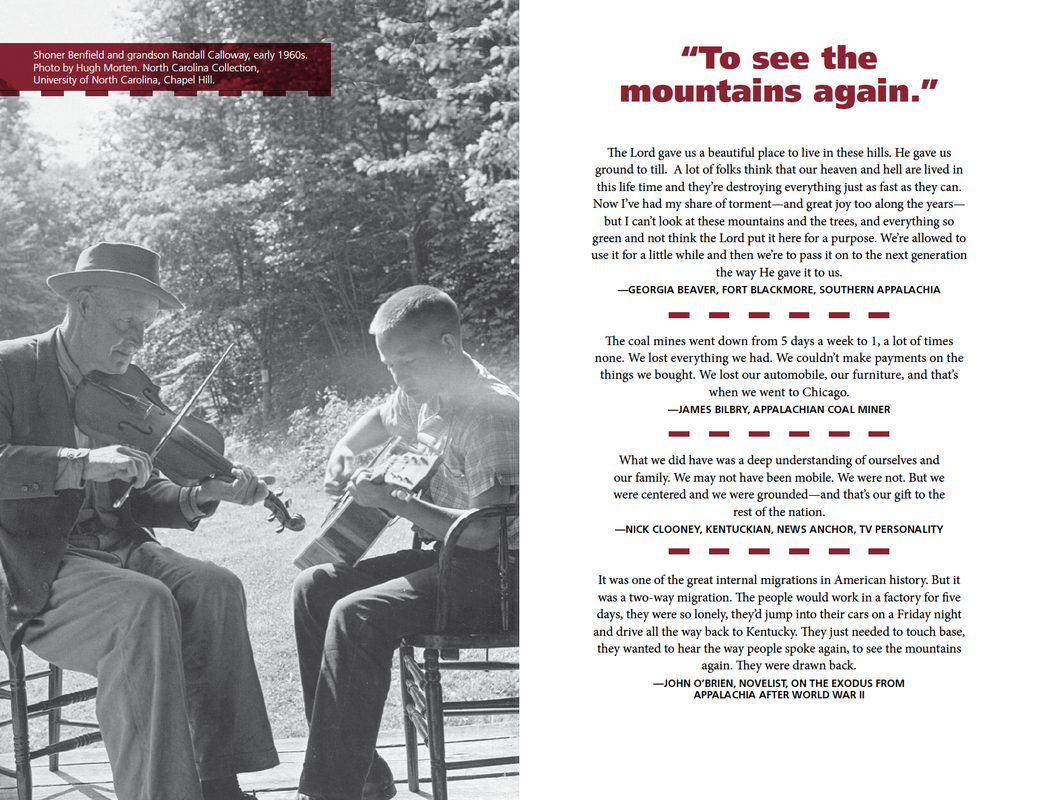 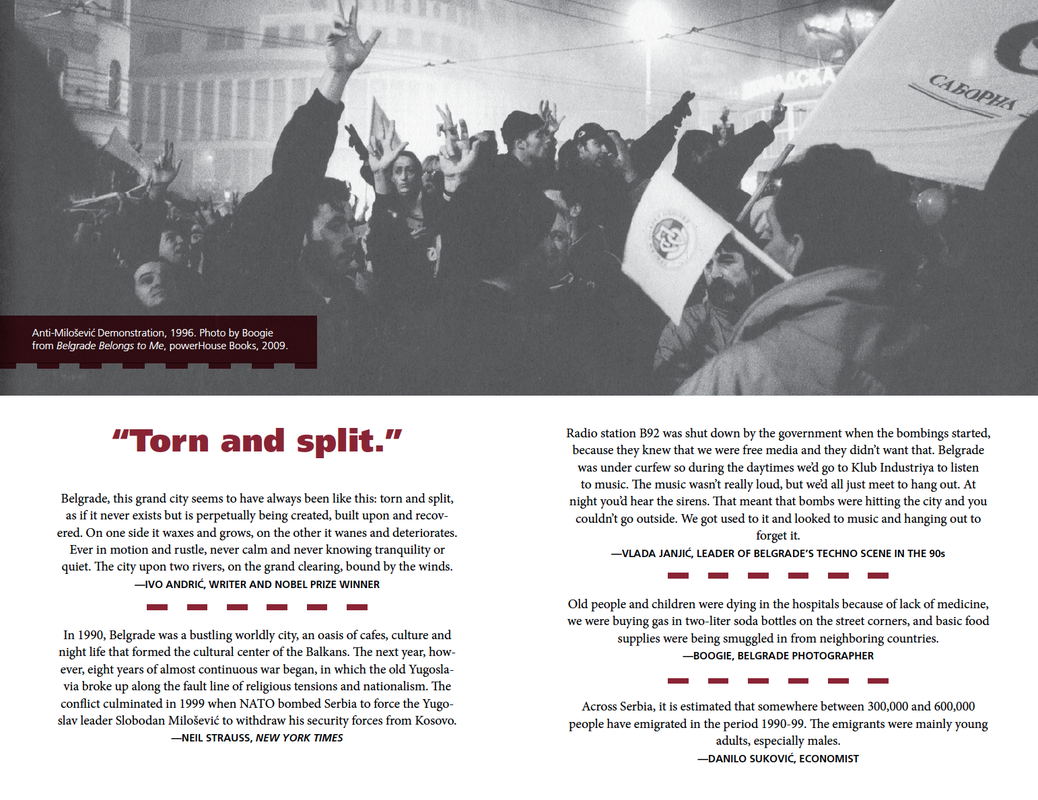 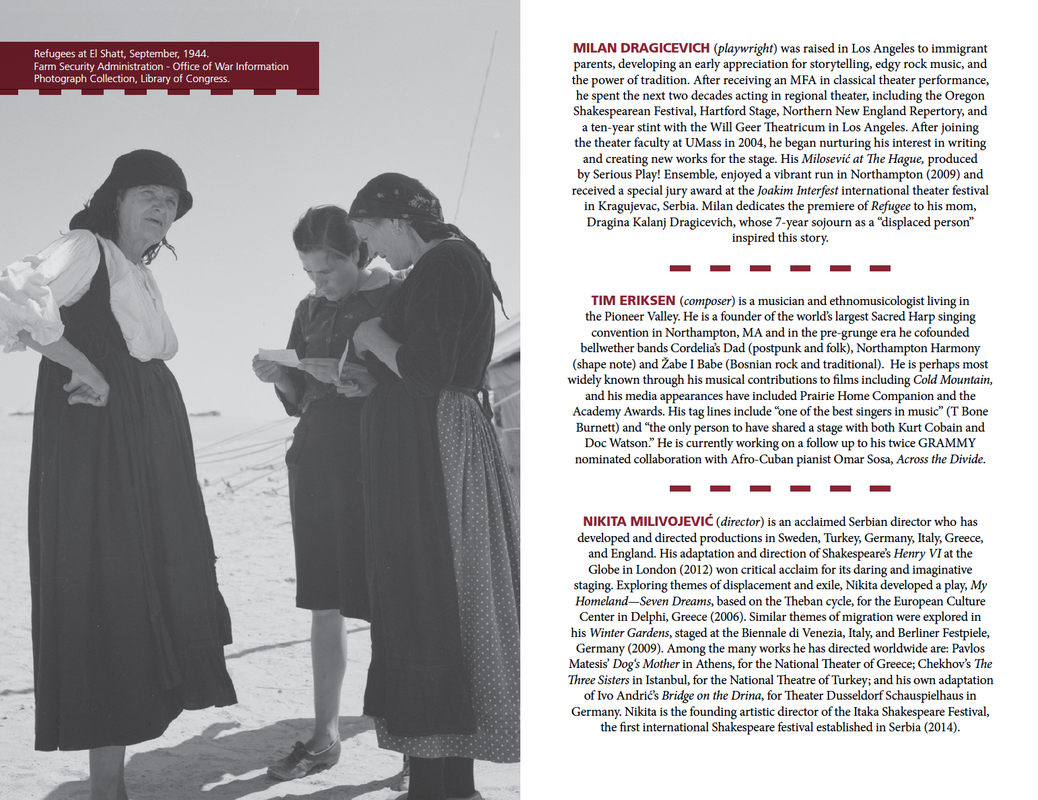 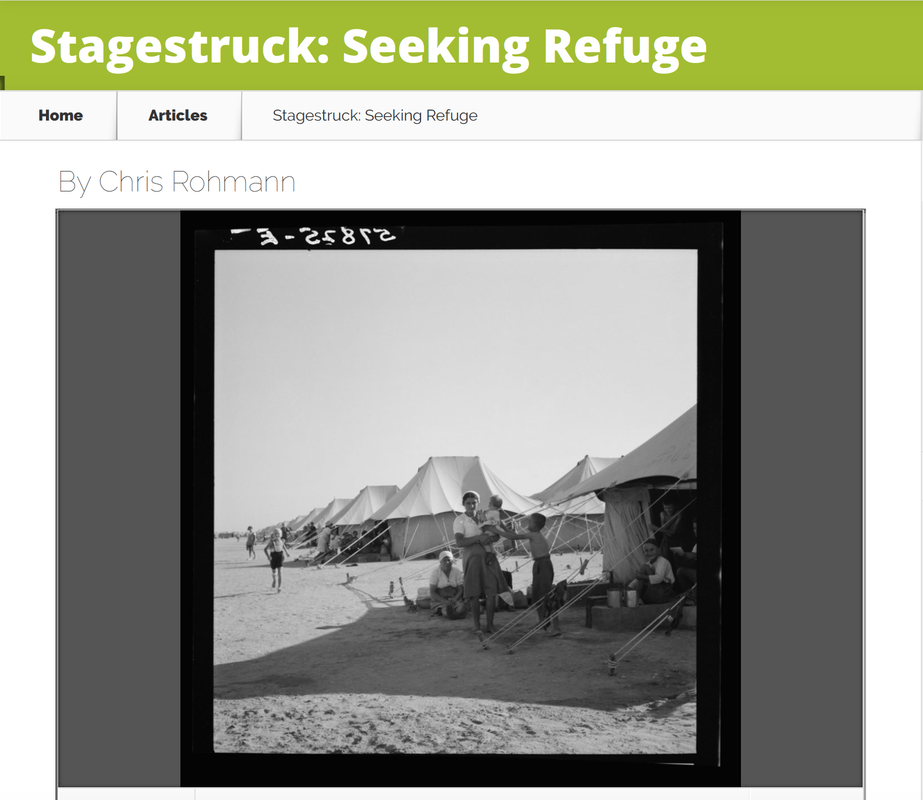 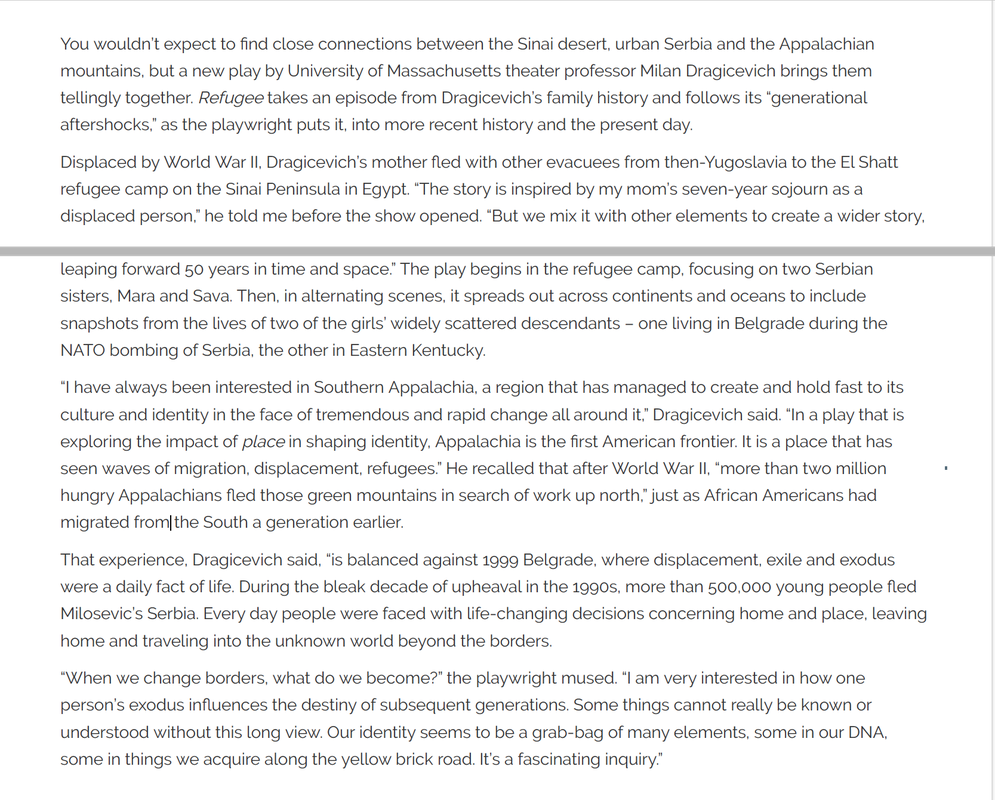 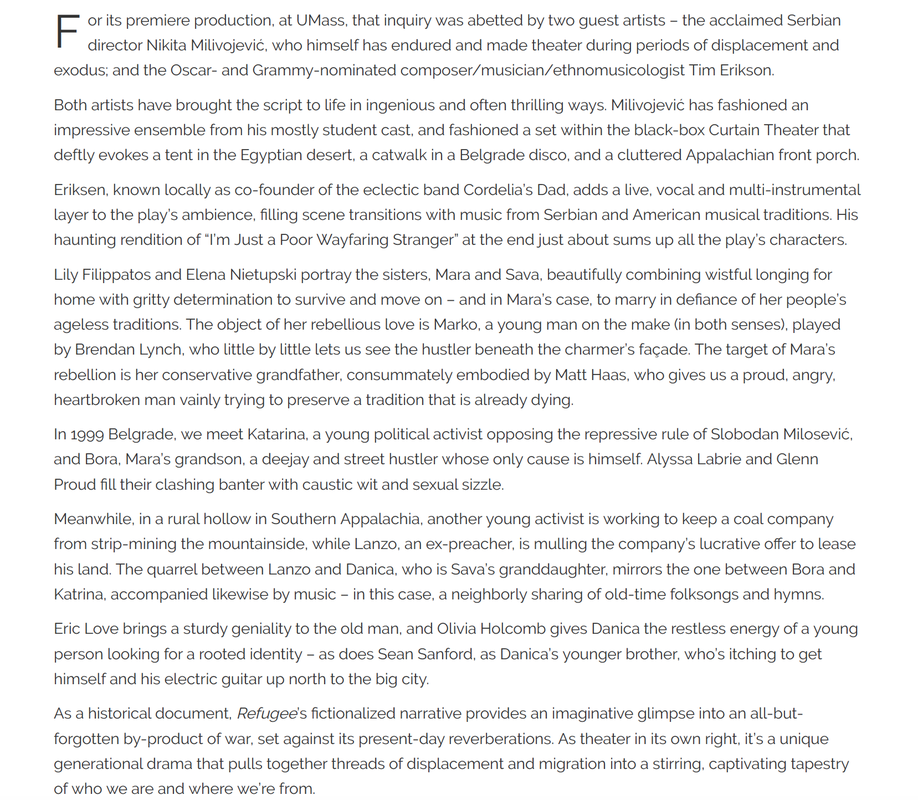 ​
​AUDIENCE TESTIMONIALS for production of REFUGEE

I attended REFUGEE on Wednesday night, and thought it was magnificent. Congratulations! It was a moving evocation, and I loved the way the stories threaded through one another in counterpoint across space and time. It was fantastically well staged, and the actors were most impressive. Not least, the music was wonderful—Tim Eriksen of course, but also the singing and music within the performance. Overall, a tremendous achievement. Thank you so much for writing it and bringing it to UMass
--Stephen Clingman (Award-winning novelist, Distinguished Professor of English, UMass)

I saw the show on Wednesday -- well done!  What a fascinating project, and so imaginatively written and staged - not to mention the sound and music!  Strong cast, too -- the two sisters are sensational.  I loved the progressive interweaving of the different narrative and relational threads, with the final coming-together "dance" and the ending where the lingering questions are answered at last.  I thought the Egypt and Belgrade scenes were the strongest -- great emotional currents in the former and fabulous energy in the latter.
--Chris Rohmann (Theater critic)

I felt honored to know you yesterday.  The power of your story (your mother's) and the way that you told it through those particular characters just dug down into my heart and stretched me. I felt such a connection to each person, who you made so real.   The mix of intense drama and occasional humor and music of the place and period, the way the stage reached out to us, and the lighting dramatized each scene, it was truly like the audience was in the story.  The stage sets were as genius as any I've ever seen, with the frames and sheets and lights.  I also want to thank you for making the women in the play such strong characters. Each one held her own in such hard honest ways.  I felt the wholeness of life as I watched, the love and the pain, the hunger for connection and the disappointment…I pray that the story will go further, especially in these troubling times.
--Dorothy Cresswell (Educator, Musician)

REFUGEE was “total theater.”  The kind of theater rarely seen in this area [Boston], and only occasionally matched by productions at the American Repertory Theatre at Harvard.  Your theatrical sensibility was well complimented by the almost film-like vision of the director, as well as the production’s composer.  I was also impressed with the entire theatrical space, the ambient, design, and of course the performers.  Finally, a big bravo to the text itself.  You have weaved a stirring and epic narrative with skill and daring, with sharp dramatic action, where the multiple stories “reflect” back upon one another.
--Sasha Lekic,  (St. Sava Cultural Center, Board of Directors, Cambridge, MA) 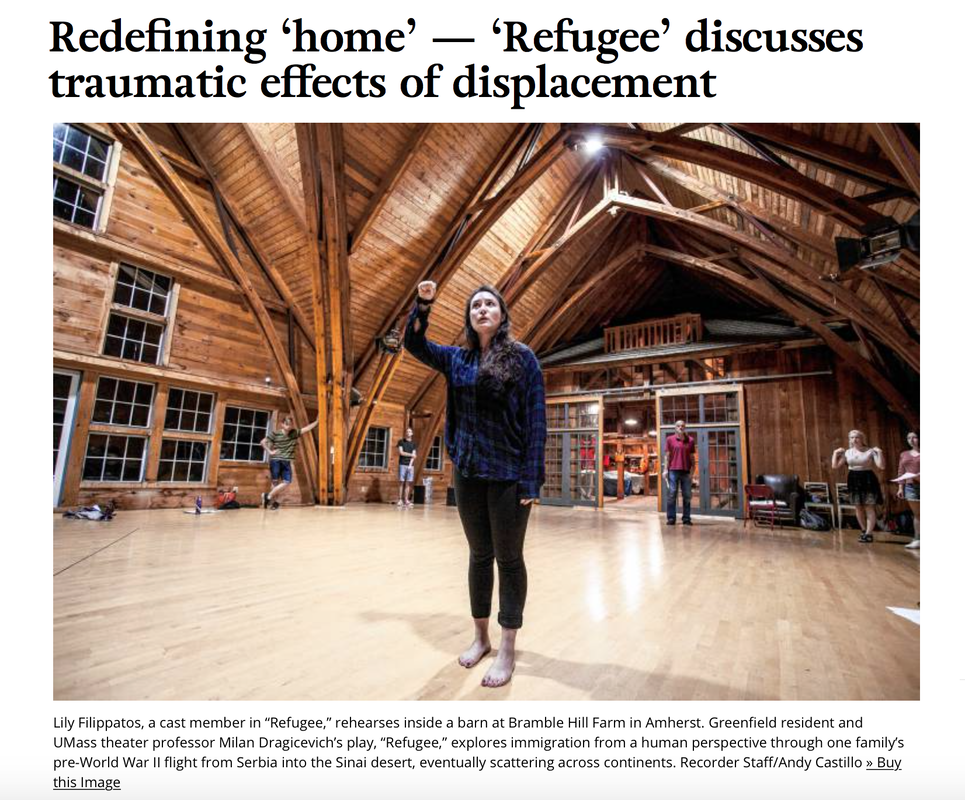 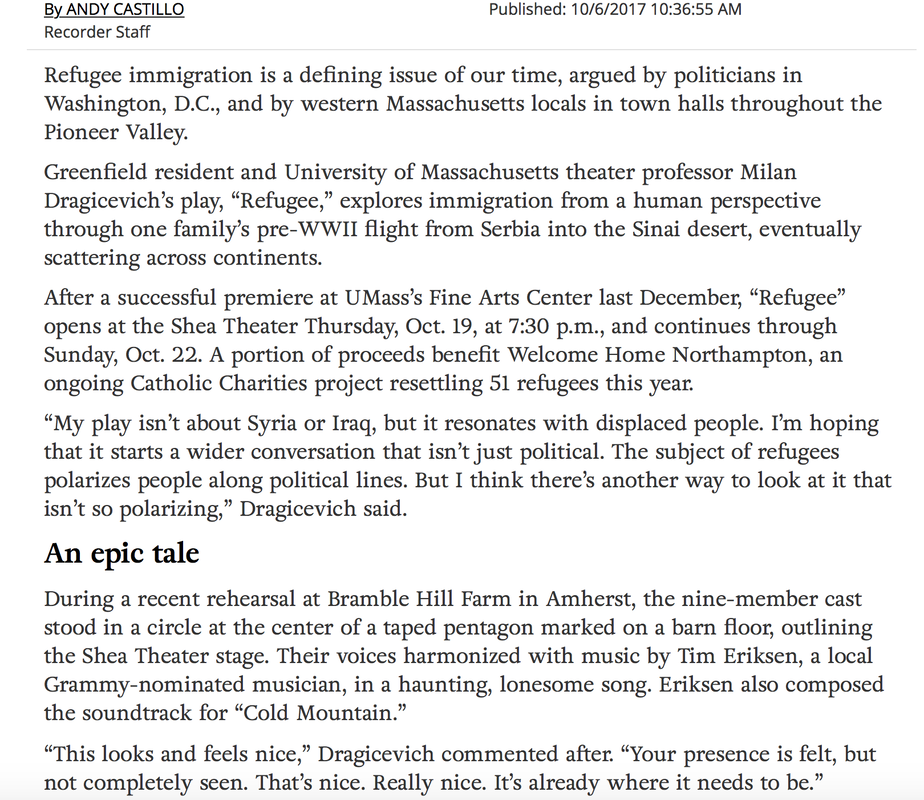 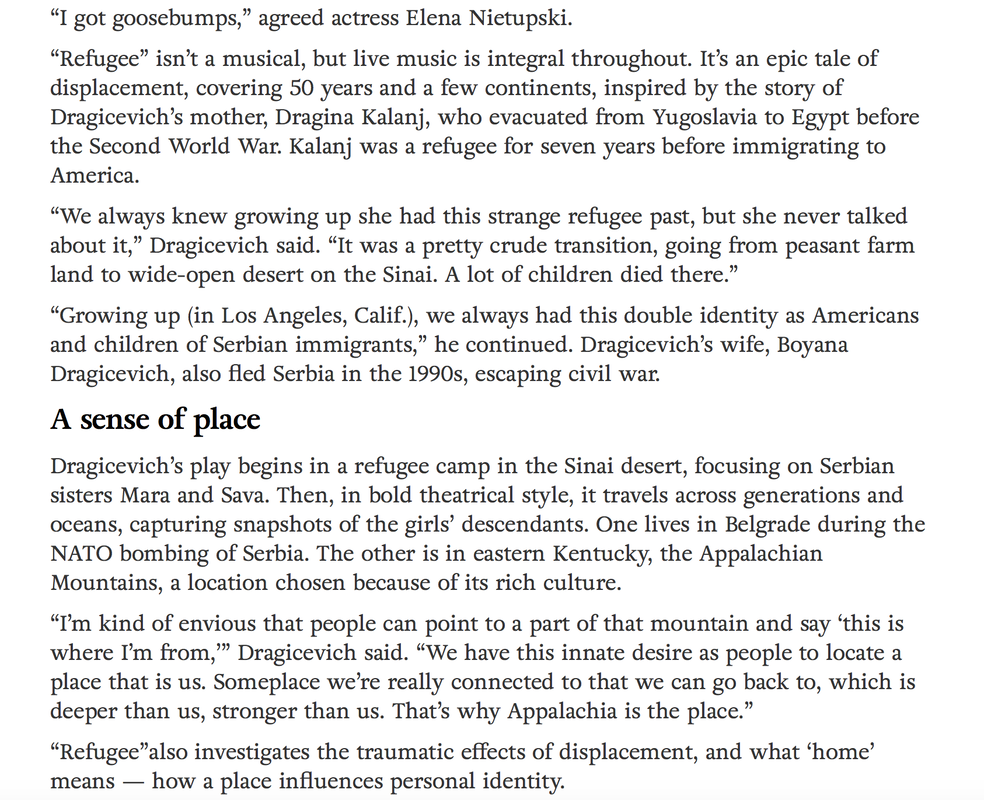 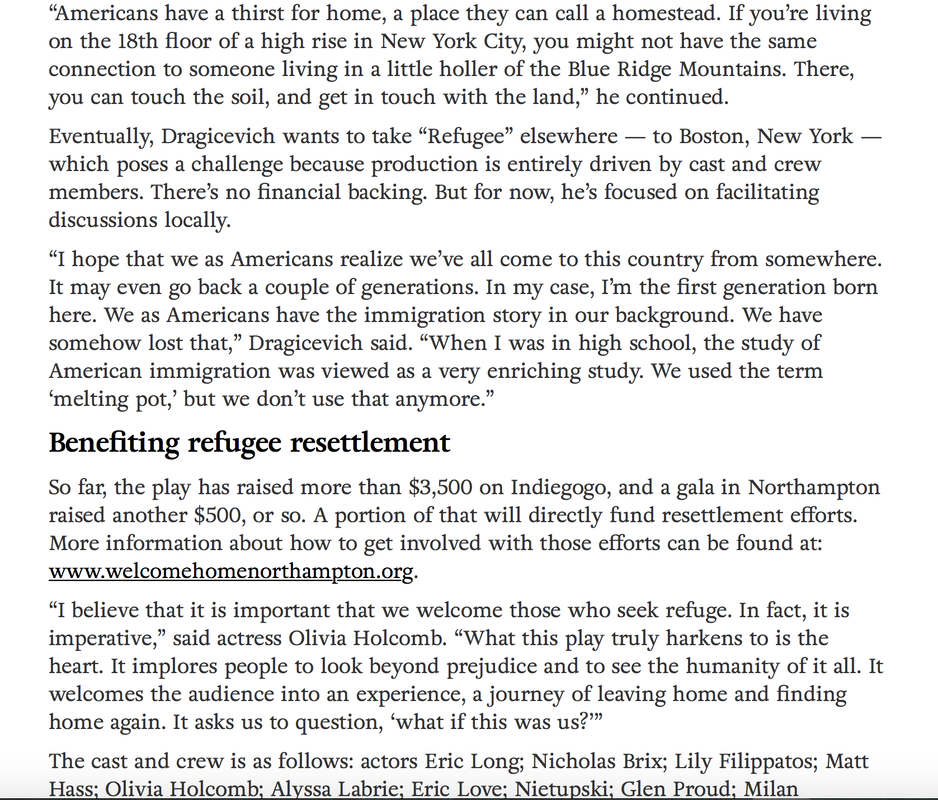