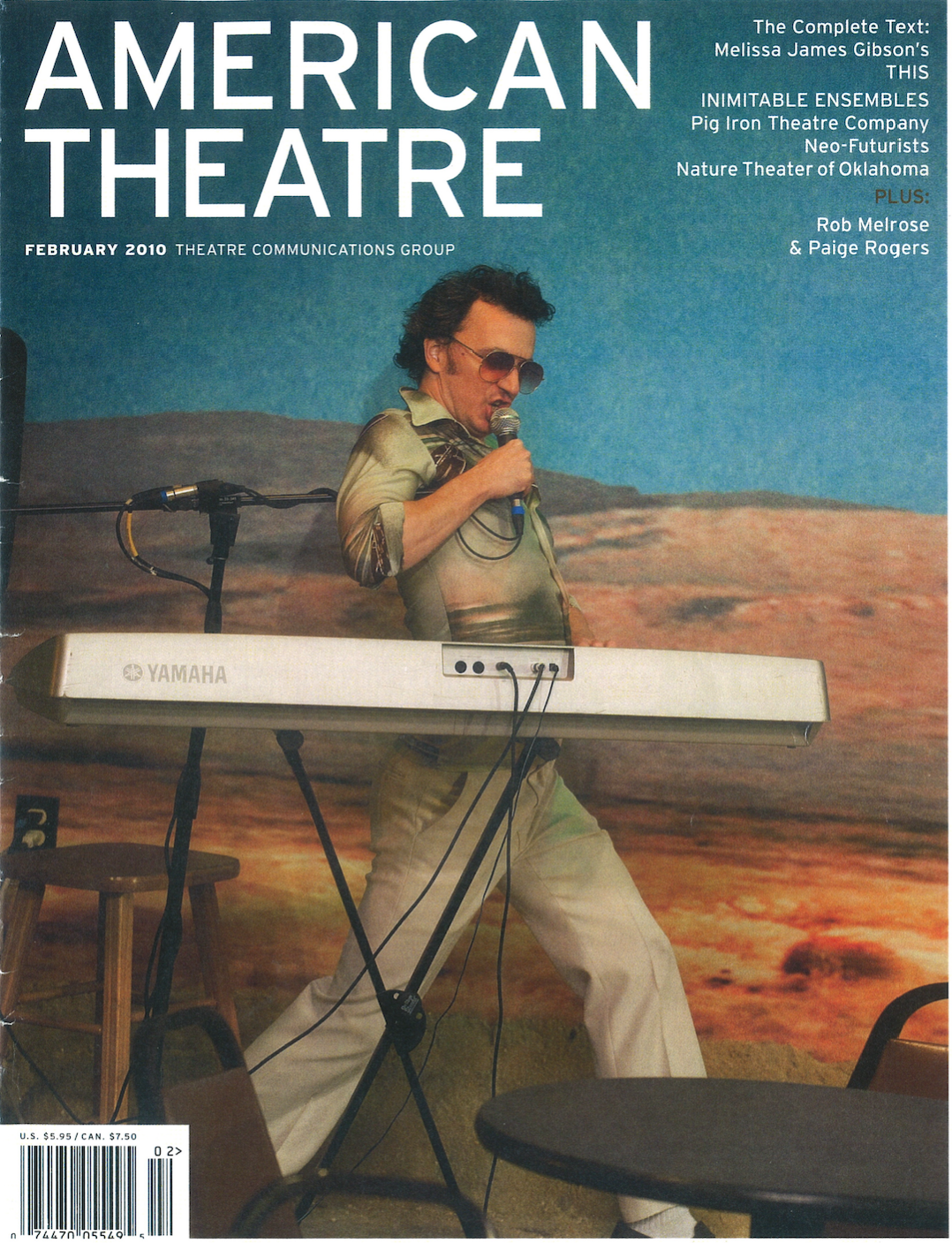 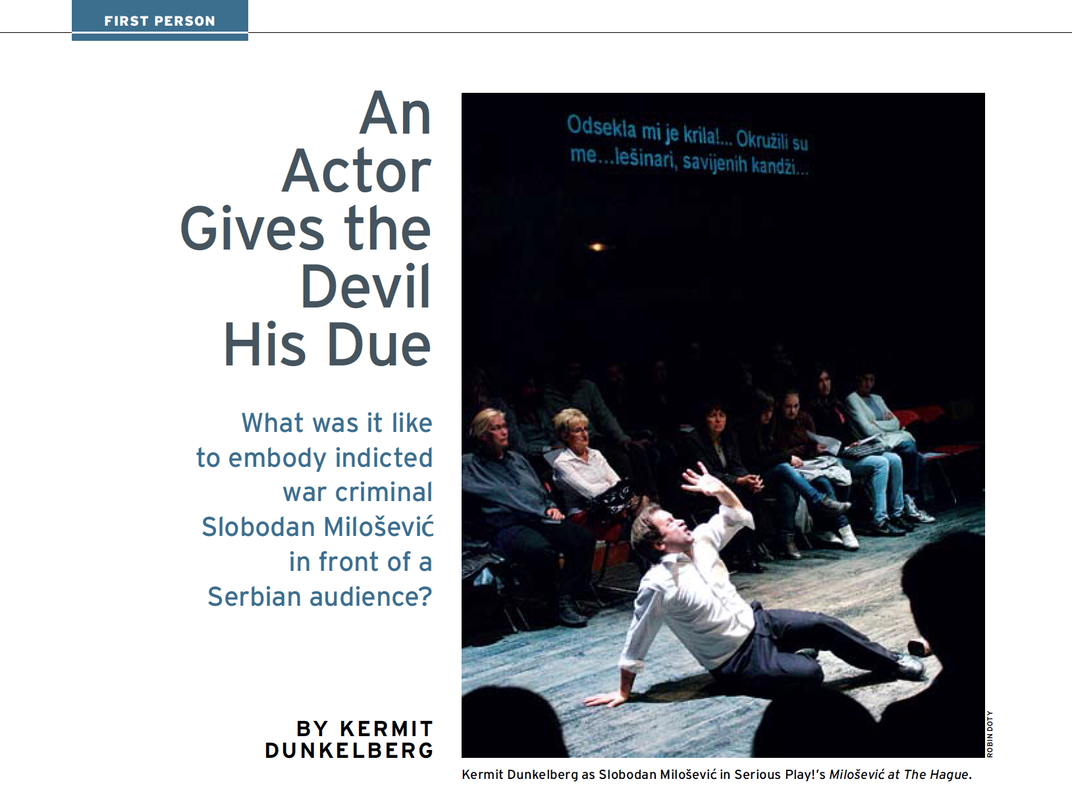 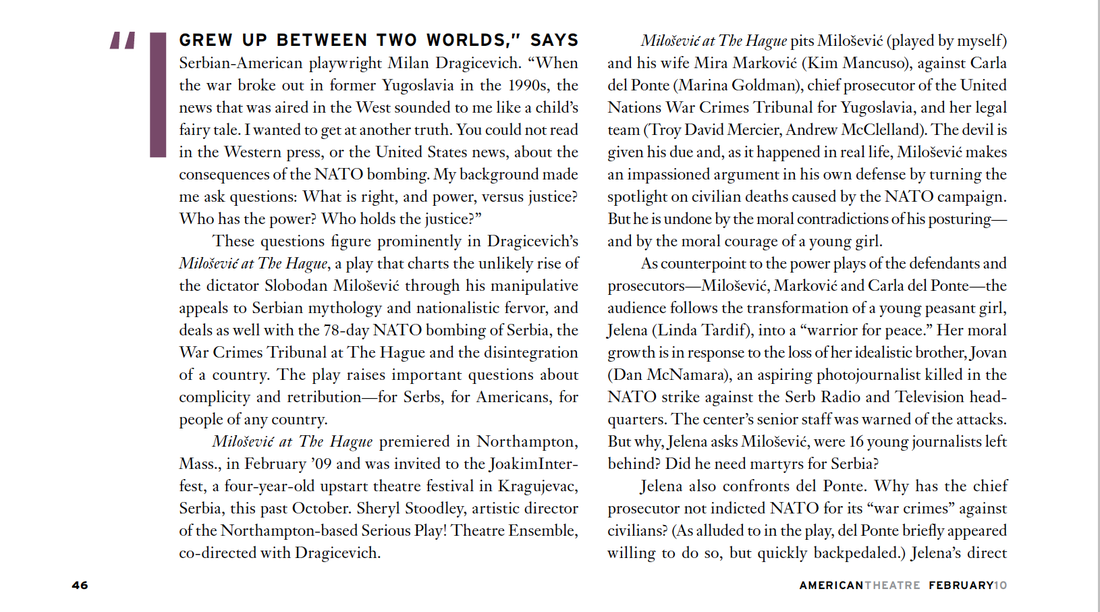 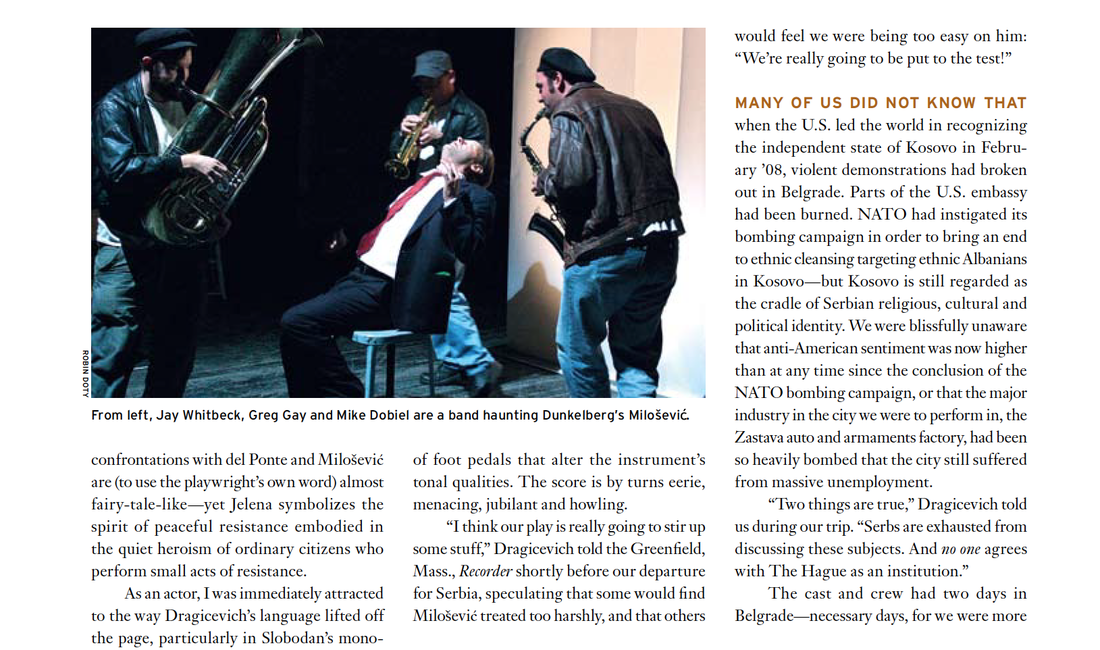 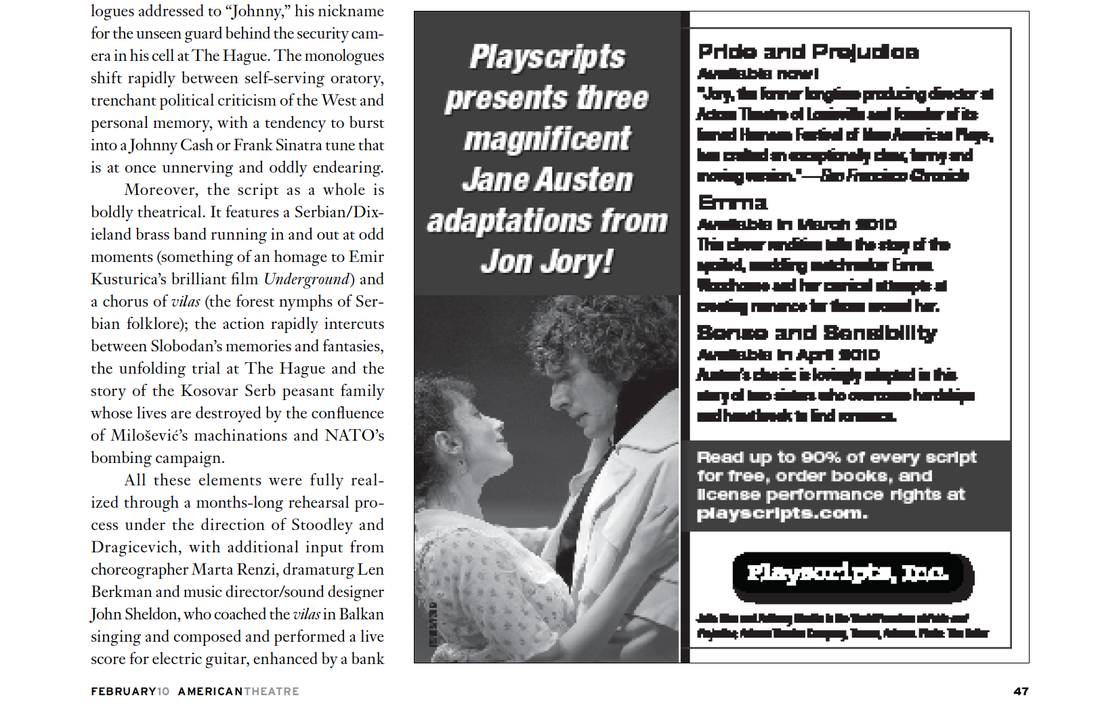 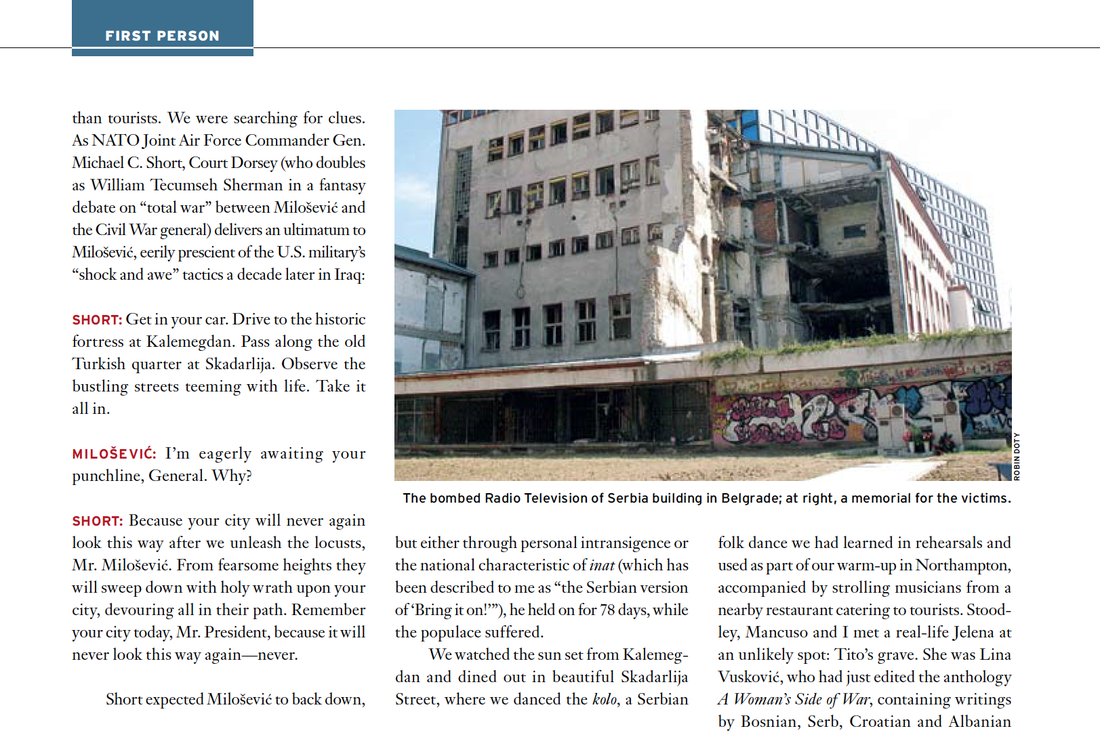 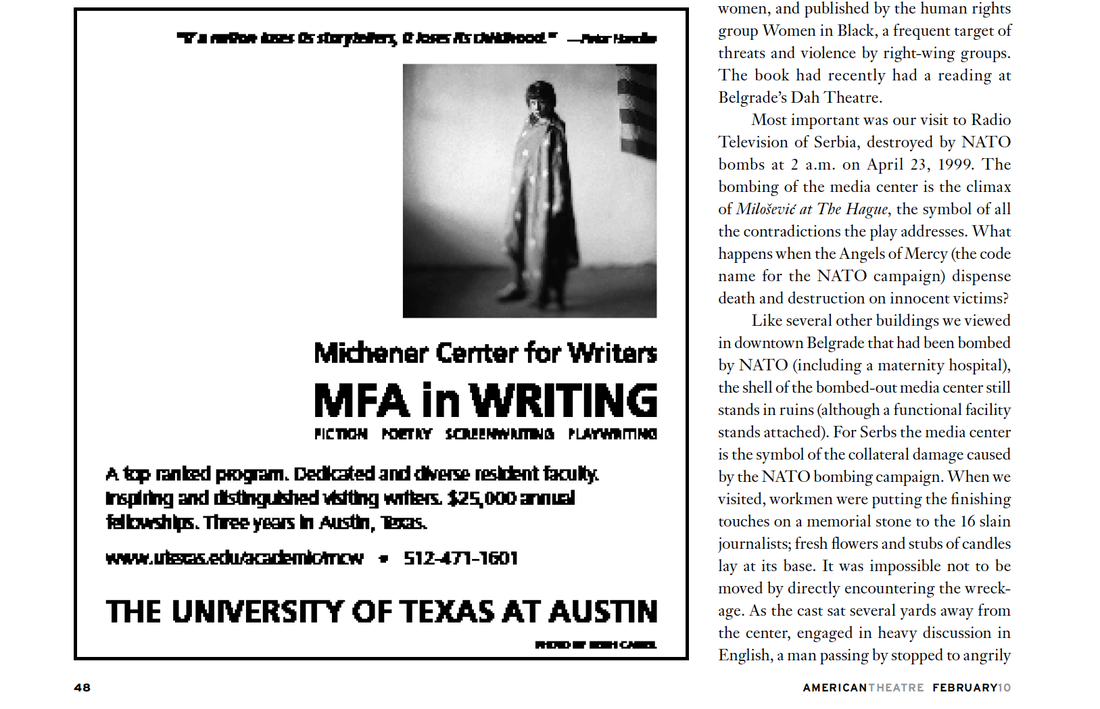 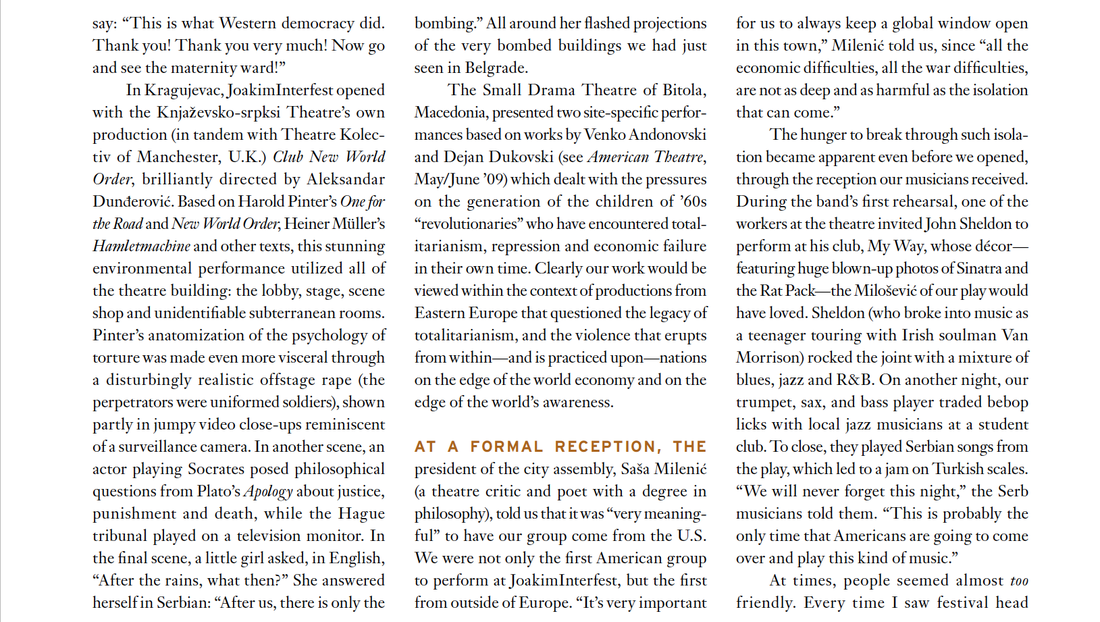 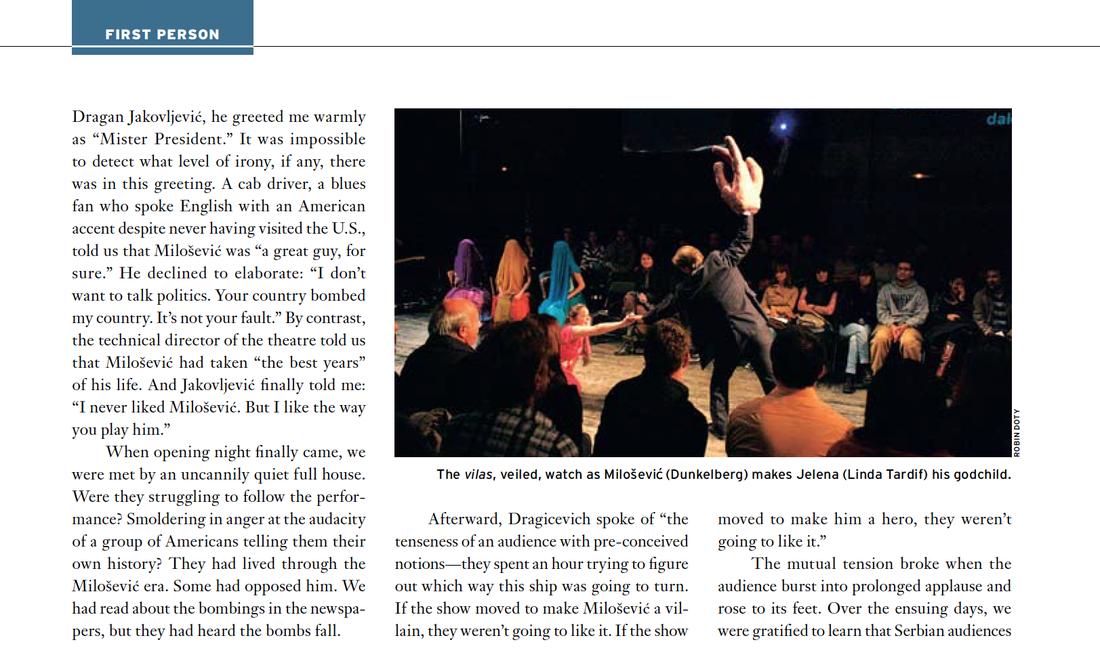 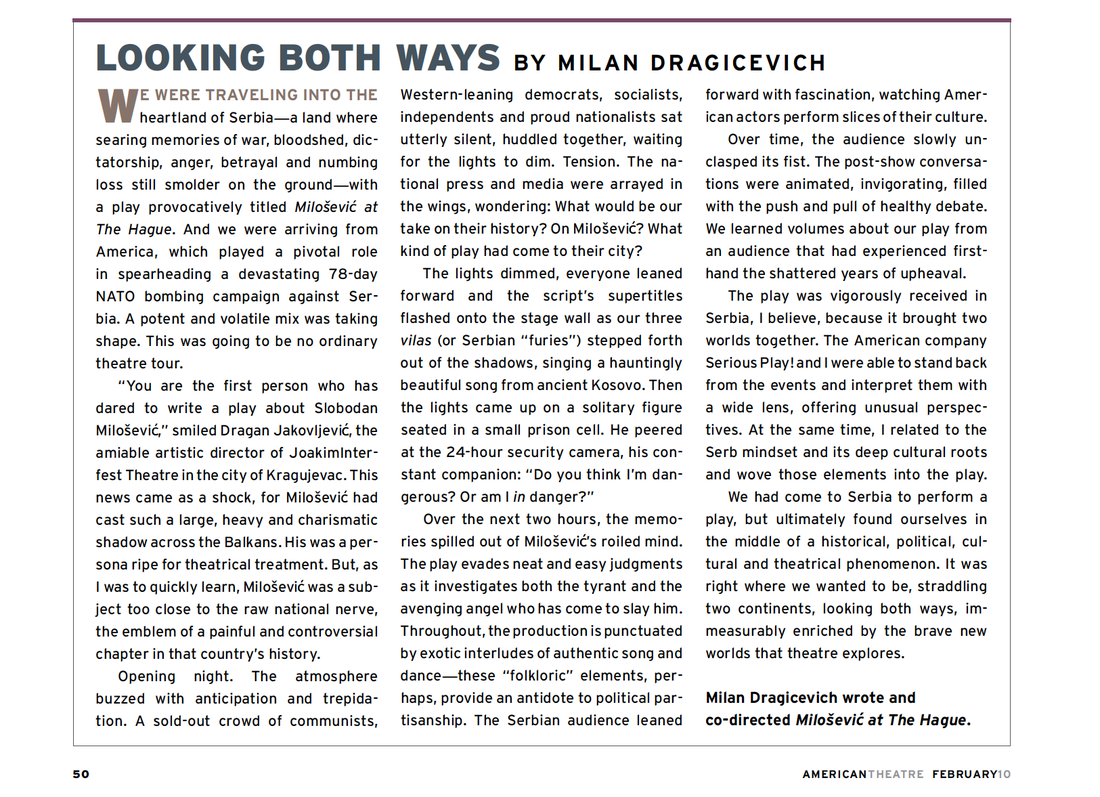 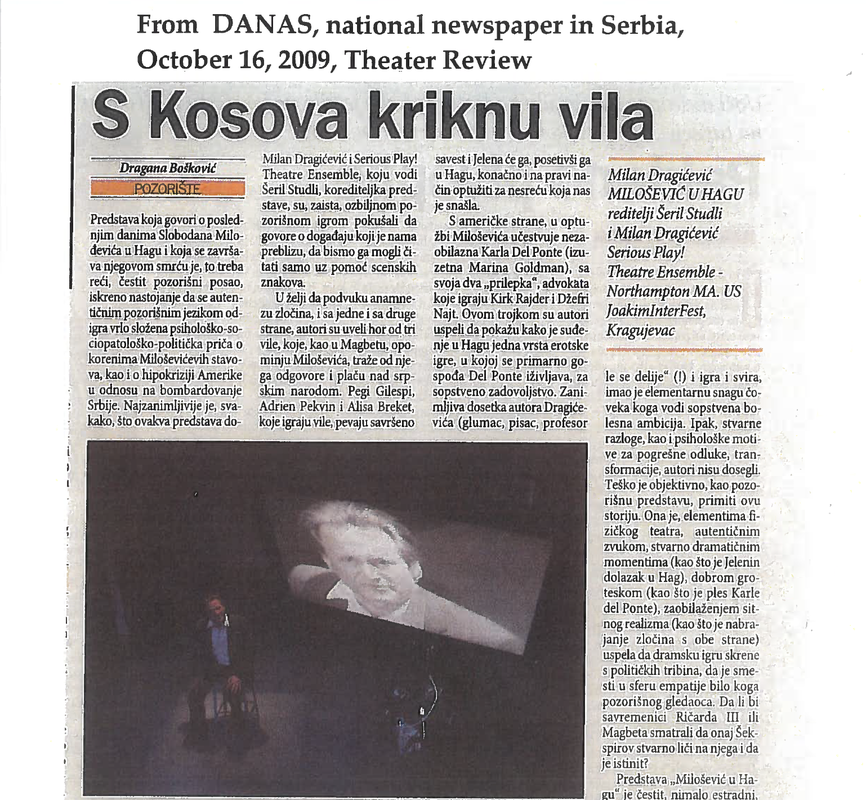 FROM KOSOVO THE SHOUT OF THE VILAS

The play which describes the last days of Slobodan Milosevic in the Hague and which ends with his death is a very effective and honest work.   It is an honest attempt,  through an authentic theatrical language, to show a very complex psychological-sociopathological-political story about the roots of Milosevic’s mindset, as well as the hypocrisy of the West’s bombing of Serbia.   Particularly intriguing is the fact that this play arrives from America, not from Serbia, which has, to date, not dealt with this thorny subject in any serious manner.

Those who expected political pamphleteering, with clear judgments for a winner, did not receive such an outcome.  Milan Dragicevich wrote a text that attempts to place into collision two parties who do not hear one another.   Even though there are visual screens or panels placed above the audience, there are no actual photographs of war crimes displayed on them, though they are verbally described in vivid detail.    Neither are there images of the bombing of the Belgrade Television and Radio Center, though the evidence for this horrific event has been truthfully described.   Milan Dragicevich and the Serious Play Theatre Ensemble, led by Artistic Director Sheryl Stoodley, co-director of the play, have depicted with integrity a series of events that are especially close to us so that we might better be able to interpret them through the symbols of theater.

To better underscore the symptoms of war crimes, on one side and the other, the author introduces a choir of three “vilas,” who, as in Macbeth, warn Milosevic, ask him for answers, and weep for the Serbian people.  Peggy Gillespie, Adrienne Paquin, and Alyssa Breguett, who play the vilas, wonderfully sing the ancient Kosovo melodies in perfect Serbian.   Also, there are three brass musicians, as well as one electric guitarist, in the production.   The splendid singing of our old songs can be credited to Milan Dragicevich who, even though born in the United States, closely embraces our traditions through his engagement with them.   The play was translated into Serbian by Bojana Sain-Miletic.   On “our” side are Jelena (precisely and touchingly played by Linda Tardiff) and Jovan (Dan McNamara), twins from Velika Hoca, as well as their Uncle Rade (the Dickensian Nick Simms).   The two kids, as Milosevic’s godchildren, are his conscience, and Jelena will, upon visiting him at the Hague, finally and correctly accuse him of the misfortune that has befallen us.

Arrayed on the American side of the indictment are the all-encompassing  Carla del Ponte  (the excellent Marina Goldman) with her two “appendages”-lawyers, played by Troy Mercier and Andrew McClelland.   Through this “troika” the authors have succeeded in showing that the trial at the Hague is a kind of erotic game, in which Madam Del Ponte “plays” with others primarily for her own self gratification.   An intriguing device by playwright Dragicevich (actor, writer, university theater professor) involves Milosevic’s system of intimate defense (though in this production he does not doubt himself or his spouse, played by Kim Mancuso), specifically his introduction of an dream-like character—General Tecumseh Sherman (the effective Court Dorsey), who fought against the South and confides that he did so out of love, as an avenging angel.  Finally, Kermit Dunkelberg, as Slobodan Milosevic, who first confesses to his security camera, which monitors him at the Hague cell, and then sings the patriotic “Igrale se Delije” (!) and dances and plays—he has the foundational strength of a man who is led by his diseased ambition.   Nontheless, the authors were able to grasp the real reasons, as well as the psychological motives for Milosevic’s faulty decisions and for his transformation.   Since it is a theatrical event, this story is difficult to understand objectively.   The story, through physical theater, authentic sound, real dramatic moments (such as Jelena’s arrival at the Hague), excellent use of the grotesque (such as the dancing of Carla del Ponte),  skirting petty realism (like the statistical tally of crimes on both sides) succeeded in moving the play away from political grandstands and into the sphere of human empathy for any theatre audience.   Would the contemporaries of Richard III or Macbeth think that Shakespeare’s character really resembles him? And that it is truthful?

This production of “Milosevic at the Hague” is honest, not at all showy, a high quality attempt to tell this story, which is, as in ancient times, placed in the sphere of the moral and personal and universal, under conditions which still prevail, where people on both sides are not satisfied with their political leaders (and the dead cannot speak).  This story features soaring theatrical language, an excellent script by Milan Dragicevich, and effective movements directed by Sheryl Stoodley.  Joakiminterfest in Kragujevac, and its selector and director, Dragan Jakovljevic, have succeeded in allowing this production to “shout out”  from Kragujevac, and that “shout” will resonate, with others, for a long time.

Translation from the Serbian by Bojana Sain-Miletic

Joakim Special Jury Award for the “daring, skillful, dramatically innovative and socially engaged approach” to telling the complex story of conflict in the Balkans. 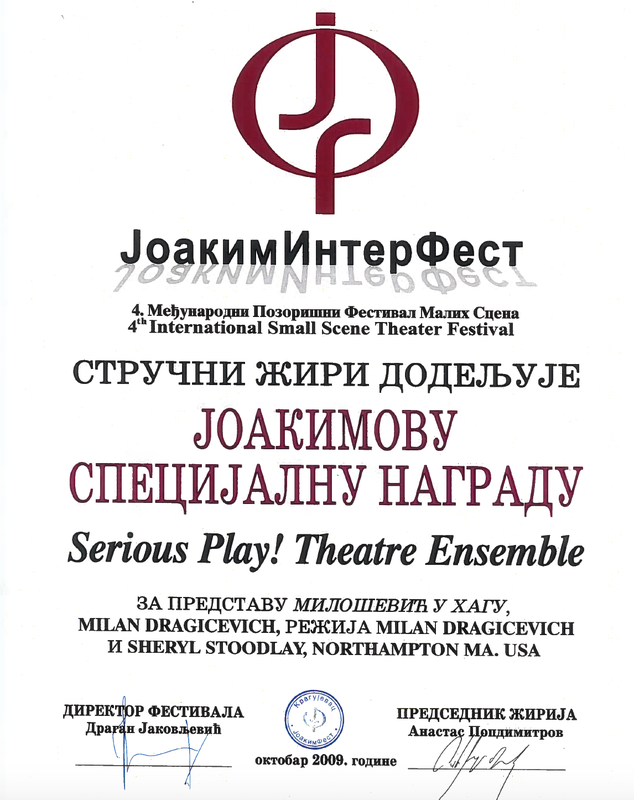 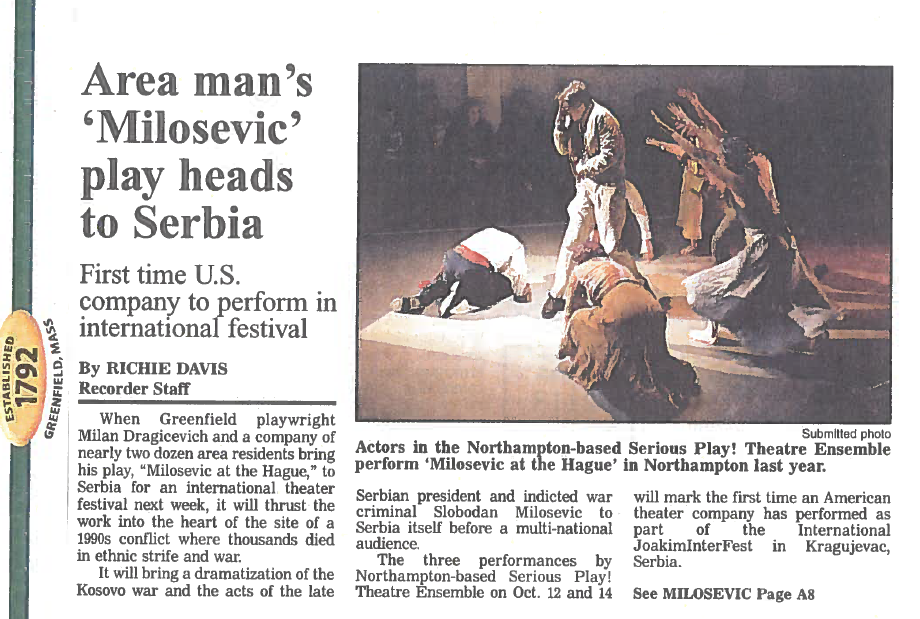 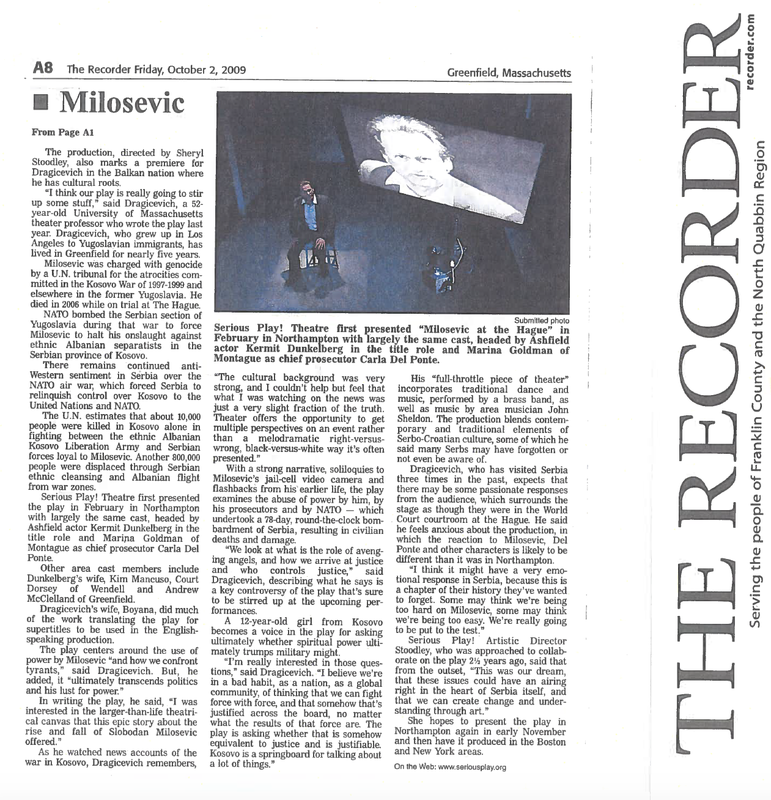